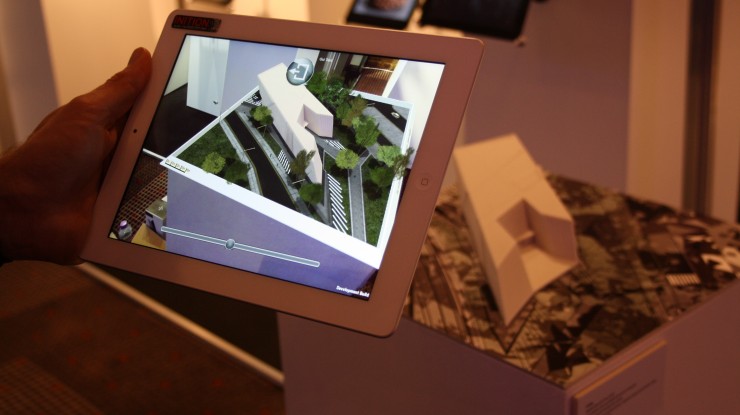 A new iPad application that promotes augmented reality has been developed by London based company, Inition. The application makes it possible for architects to visualize the interior of the building that they are working on, get an idea on how the building will look during night time and also how the wind will flow around the building in the project.

The technology can also be used for revealing the structure of the building and some of the available services. The technology is better described by its creators as “augmented 3D-printing”.  By combining the benefits of augmented reality and 3D printed models, the team managed to augment one of their client’s buildings, successfully.

Using an iPad, the model can be easily overlaid with a variety of information that merges with the actual, physical model, placed as a marker, on a specially designed mat. The technology surely is made to impress, during architects’ presentations and design reviews.

Various additions, such as pedestrians, cars, natural surroundings or day/night view can be available, for this purpose. Audio tracks can also be added, in order to reproduce the traffic or natural sounds. The building’s location on Google Maps can also be revealed, next to internal floor plans and various other kind of information.

Apparently, augmented 3D-printing is already having an impact on the way architects build, in regards of creating simpler ways to present and design their projects. Offering the possibility of direct visual context, seen as an overlay that is placed on top of a real-world replica of their project, augmented reality allows a better intuitive and accessible procedure and method of presenting the results of their work.

The augmented reality technology might also be used for simulating various events of great importance to the public, like a fire evacuation, or inhabitant walk-paths through a newly created district. The importance of such tools can be fully understood in terms of efficiency and money saving politics, depending on the focus of the project.